So it’s been four days since I went to my first Comic Con, and I’m still on a high from it.

Having never done ‘legit’ cosplay before, I had no idea what to expect or how people would react to my attempt at Daenerys’s most amazing outfit. I am still so in awe of the kindness and creativity radiating from everyone I talked to, and I have so much gratitude for the Comic Con community welcoming me so warmly.

A few people have asked to know more about the coat, the process of making it, etc.—so I’m going to share the story of…

So ya, that’s how this started. After telling my mom how badly I wanted to try to recreate the coat last summer, she finally found the perfect fabric on sale at Burlington in the form of blankets. She had looked for fur at fabric stores, but she felt like all the faux fur they had was too long for what we needed. (And after the trials of the faux fur vest she made me for Burning Man a few years back, she vowed to “never work with that shit again.”)

So, blankets—that’s where we started. Then we found a cosplay pattern from Cosplaid that helps show you how to transform a coat pattern into one that more closely resembles Daenerys’s coat.

When we started laying out the pattern, we were scared we might not have enough of the white blanket fabric to do the whole coat. We barely made it, our only saving grace was the fact that the sleeves do not have fur around the entire arm. Crisis averted!

We found a charcoal-ish fabric at Joann’s for the lining that has the texture/feeling of suede but is not actually suede. We got 5 yards but didn’t end up using all of it–despite having to recut the top lining pieces a few times, which I’ll explain in a sec.

We then endeavored into trying to recreate the texture on the actual Daenerys fur coat, which ended up being the biggest pain of the whole thing.

I still can’t quite figure out how the insane people at HBO did that. There is definitely some sort of stitching or serging pattern going on, but I still can’t ultimately tell how that fabric is embellished and constructed. 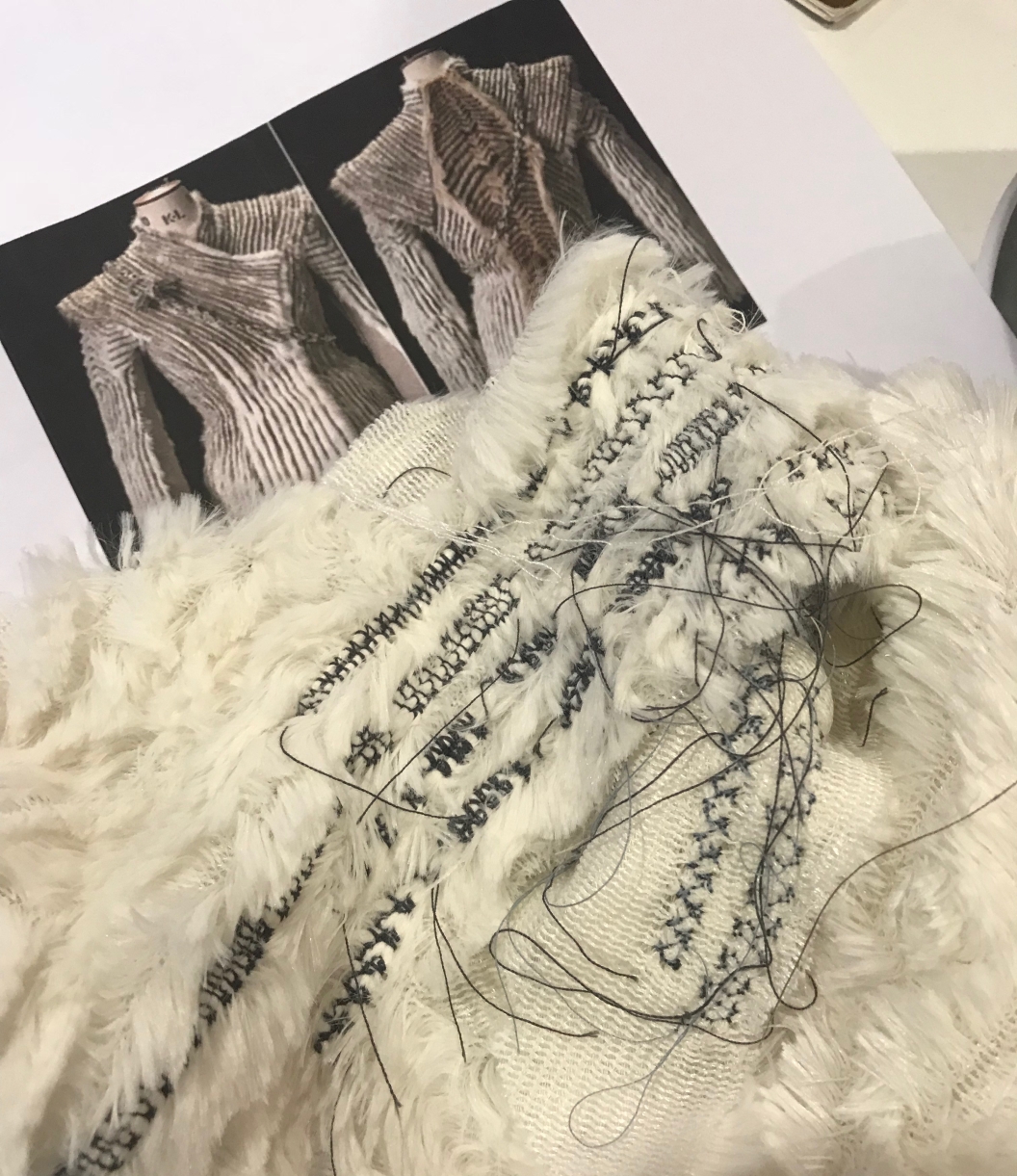 We finally found a stitch that we liked on my mom’s sewing machine, but ultimately, she ended up using a few different stitches throughout the whole thing. To give the shoulders definition and make them stick out more, we used buckram—the same material you use when making hats.

We then applied iron-on interfacing to the white fur to make it stiffer and more stable for the stitching patterns. Still, after putting so many stitches into the fabric, it shrank. A lot. Like, it almost didn’t fit me around the torso and armpits.

But my mother–being the genius she is–thought to delicately take a seam ripper to the interfacing in between the stitching lines, which helped it stretch back out to close to its original size. That was why we had to recut the lining pieces for the top; we had to make it fit the post-stitching size of the pattern pieces.

But, slowly, the mythical Daenerys coat started to become a reality. 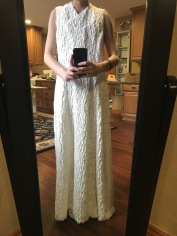 We found the three-headed dragon pendant and chain on Etsy, and the jump ring/circle piece was from Hobby Lobby.

In the end, we had just enough left-over fabric to line the outside edges of the front and back pieces with fur, which I think really added some authenticity.

The one regrettable thing about using blankets was that the back pieces did not have long enough fur to replicate the intricate design with varied fur lengths on Daenerys’s coat. I think it the back of mine looks amazing, but it doesn’t have quite the definition or detail that her coat does.

The only thing left was braiding the wig. Not going to lie, the YouTube tutorial I found made me think it was going to be super easy. It was not. I finally had to settle for a variation that was not exactly authentic.

I struggled so hard with that damn wig, but we made it work.

And then, we were done! And ultimately, I really couldn’t be happier with how it turned out! My mom and I definitely learned a lot along the way about what to do and not do when attempting future cosplays.

I would also like to give another shout-out to my amazing mother for going on this crazy journey with me. I feel like the luckiest girl in the world to have a mother like her, and I love her more than anything.

Here are some more photos, hope you enjoy! And if you’d like to connect, here’s my Instagram! @cassandralane 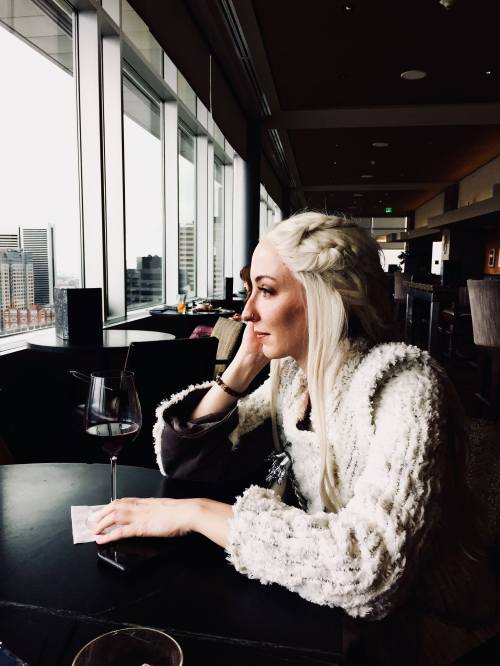